Wines of Almería – a general overview

Our province of Almería is the most eastern – and almost forgotten (we don’t get tired of pointing that out 🙂 ) – province of Andalusia. Andalusia has a wine tradition going back thousands of years and is one of the oldest wine-growing regions in Spain.

The coast of Almeria was always important for the different cultures of the Mediterranean, because of the outback that offered plenty of minerals. That was the reason why Phoenicians, Greeks, Carthaginians and Romans already settled here and in order to supply their troops and trading posts also brought their knowledge and plants to grow wine.

Topography, geology and climate on the coast are ideal. The mild average temperatures, many hours of sunshine and high mountains with hardly any frost lead to strong and characteristic wines with a relatively high content of alcohol.

The most famous wines are of course the sherries from the west of Andalusia, where you’ll also find most of the other wines, protected by the declaration of origin (according to the DO rules).
In addition to these classifications of origin, there are 16 further geographical classifications (Vinos de la Tierra). Five of them are in our province.

The recent history
of wine growing in the province of Almería

From the 18th. century to the middle of the 19th. century, the province of Almería and winegrowing were very closely linked.

However, financial reasons led to wine production almost completely coming to a hold. In the past decades, however, grape cultivation in Almeria has picked up speed again, and the export is growing steadily. However, most of these are table grapes – the grapes that we eat, but that do not necessarily lead to the production of a high-quality wine.

Bit by bit, wineries also emerged, often in the form of so-called garage wineries, which are dedicated to the production of high-quality wines with know-how and passion.
A few wineries have even managed to establish themselves on the national market and some are currently exporting their best wines abroad.

As already said before, recently 16 geographical indications in Andalusia have been granted the right to use the traditional Vinos de la Tierra seal, a quality certificate that ranges somewhere between that of ordinary table wines and the status of the designation of origin.

The wine-growing region of Almería counts the following 5 areas: 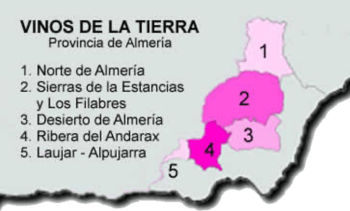 In terms of landscape, these areas are very different. There are vineyards in the desert or along river plains. But they all have one thing in common: the vines are planted at altitudes between 500 and 1200 meters. Here they benefit from both: the Andalusian sun and the coolness of the highlands at the same time.

The production is traditionally based on local markets and are linked to family-run wineries that have introduced new grape varieties when modernizing their vineyards. Only very few wineries are exporting their wines, so your only chance to taste those andalucian wines is when visiting the area.

Don’t miss the opportunity to be informed about our latest offers, news about us and our business. … or dream away watching the most recent photos. Just subscribe to our newsletter.
We hate spam as much as you do, so be assured your email address stays with us and will not be passed to third parties.

You can unsubscribe at any time by clicking the link in the footer of our emails.

This denomination indicates wines that have their protected designation of origin in the municipalities of Chirivel, María, Vélez Blanco and Vélez Rubio.

With regard to the organoleptic* properties, the white wines are fresh with a crisp acidity and an abundance of aromas that resemble lemon and gooseberries.

The rosé wines are just as fresh with a strong acid structure, a fruity character and a harmonious taste.

The red wines have a lot of body, are balanced in their acid structure and have a little more alcohol. The aromas are primarily reminiscent of raspberries, blackberries and liquorice.

As a rule, great care is taken to ensure that the tannins are soft and well-integrated even at a young age.

* Organoleptic = food according to a certain evaluation scheme in terms of properties such as taste, appearance, smell, colour without additives, only testing with the senses

The area of production and winemaking of this growing zone corresponds with the 26 municipalities of the Almanzora valley.

The combination of the good soil of the valley, the high number of hours of sunshine per year (3,000) and the height of the area (between 800 and 1,200 meters) produced unique wines.

Its organoleptic properties present floral aromas and notes of dry mountain grass and express themselves with intensity and strength.

The vineyards are located in the Almeria desert, the only desert in Europe, at an average height of around 525 meters above sea level.

The Ribera del Andarax wine region lies in the central section of the river of the same name.

Most of the vineyards are between 700 and 900 meters high on clay, slate and sandstone soils.

The geographical name includes 21 municipalities in the province of Almeria. The production traditionally focuses on a very unusual variety of edible table grapes, which is named Ohanes in honour of the city in which it originated.

Between the Sierra Nevada and the Sierra de Gádor, on the upper reaches of the Andarax River, is an area with a rapidly growing wine industry.

In addition to the typical local red wine or rosé, research is being carried out to produce other high-quality varieties.

Other regions in the province of Almería

The wines of the above wineries are basically country wines with a protected geographical origin. So-called “Vino de la Tierra” with IGP* status.

… that much for “gobbledygook”

The vineyards are all on the slopes of the mountain ranges around Mojácar. In the lower regions, it gets far too hot in summer for the sensitive grapes so that the sensitive grapes would cook on the vine, so it could still be harvested fresh. Then there is no more sexy wine 🙂

But also outside of the IGP zones we found a few very good wineries that are worth having a tasting. Here you are:

Besides wines, Almeria has a lot more to offer:

Yvonne being a Sommelière you can imagine that the name of our Bed and Breakfast in Andalusia of course also has a connection to the topic – Sarmiento is the Spanish word for “wine branch”.