We are Yvonne and Carsten Schnoor and together with Yvonne’s parents Marlene and Reiner, we have created Cortijo El Sarmiento, a little Boutique Hotel in Andalusia, to be precise in the hillside of Mojacar, Almeria in southern Spain.

Owning a Boutique B&B in Andalusia had been a dream of ours for 25 years, and then we discovered this beautiful gem. We knew instantly that it was right; that it could become the perfect place for people to spend a truly relaxing vacation. For us, it presented the ideal opportunity to get away from the everyday stresses of city life.

It took a lot of hard work to turn, what was a rundown Cortijo, into what it is today, but it has been worth every minute and every cent.

So one question every guest would ask us: why the heck Mojácar? Being followed by: and how on earth did you find this amazing spot?

From chambres d’hôtes in France to Boutique Hotel in Andalusia

A childhood dream and its consequences

Well, our emigration is, like probably most of the stories, marked with ideas, roundabout ways, wrong ways and everlasting changes. It all began with a childhoods dream and with my dad Reiner.

Whatever made my parents choose a French name for me – they must have had some kind of premonition. ‘cause when reaching the age of walking on two feet and being able to speak in full sentences I already had the dream of one day owning a Chambres d’hôtes in southern France where I would host guests and where I would have chicken, pigs, goats, dogs, cats and probably some more animals. My dad always shared that dream – just with a little less animals. For him chicken, dog and cat would have been enough … besides maybe a horse.We both grew older, I learnt and studied something “decent” and than a few years later started my sommelier education and opened a wineshop. My father went on being up to no good in the forwarding business … and just like me first as an employee and later being self-employed. But these are honestly speaking not the only things we have in common. Our significant others could probably write a full evening’s program about that. (Thank god it’s me writing here 🙂 )

When my dad slowly but surely reached an age where suddenly words like pension and retirement came closer connected to the questions what he would do later if not wanting to end up in front of the television he, one night at dinner, brought up the question that changed the entire life of two families : “Sooooo … listen if I’m gonna retire – what about that Chambres d’hôtes thing in southern France?”

Well and me, always ready for a crazy idea and always in search of sun and warm temperatures, jumped on that bandwagon so fast that my husband and mum could only stand there looking after taken aback.

Ok, it didn’t turn out to be France. Houses and plots were far too expensive, legislation rather close-minded and above all the weather seemed to be much too, let’s call it, changeable. Winters are far too cold and rainy and the summer – the season from which you need to make your living – far too short. So we looked for an alternative and Andalusia as an “Allyearroundgoodweatherregion” was soon found. What started than was – the Search. For land, plot and a house. And that was tough – and exhausting! 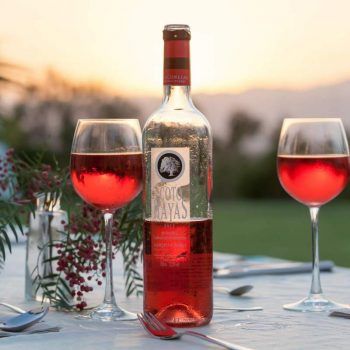 The die is cast!

Knowing by now that our new home should be in Andalusia we unfortunately had to realize that Andalusia is pretty huge. As we knew some people living between Málaga and Nerja in the Axarquia we started our house hunting in that region. We had countless viewings and the results were always the same, too small, too big, way off the beaten track, miserable access, ridiculous pool – life is not all guns and roses and having 4 persons with their must-haves and nice-to-haves it wasn’t particularly easy to find the perfect match.

At the same time we were keeping track of a house on the internet: in Mojácar (not a clue of where that would be). Beautiful pictures, a suitable floor plan , but a price that unfortunately exceeded our Budget by far. So we went on hunting with a widened radius between Nerja and Estepona. So the radius had literally doubled and we thought the chances to find the perfect match had doubled, too.

The time passed without any result – we sold the wine shop anyway because, even if we wouldn’t move to Andalusia, I would look for a professional change.

The day that changed everything

Then there came the day! As so often I was searching the internet with my morning cuppa and whilst browsing through all those real estate sites I saw all the houses I had seen a million times before – some only online, some in reality and that where the ones which didn’t turn out to be the perfect match. But Stop! On that particular day my eyes caught that house in Mojácar and it – had dropped in price! Tschaka! Off I went to share the good news with my family. As all of us thought that “online-considered” the house could be suitable the frustration was really big, when discussing that the reduced price was still too high. And it continued to be an exciting time! The weeks went by and to cut a long story short, the price dropped again.

Arrange appointment, book a flight and off to the first viewing. As before I always did the first viewing together with my mum as the wine shop had been sold so we had a bit more time available than our husbands. And lets put it like that: after the viewing we were cautiously optimistic …at least my mum. I was euphoric, in my mind already moved and had everything clear and planned. Well yes, I am sort of the insane one in the family.

Arriving back home with felt like three millions of photos we found our husbands not being not very averse. So we decided to plan a vacation to find out how it would feel like to be in Mojácar for a longer period of time. Mojácar? Oh yeah the village we had never heart about before. Andalusia, that much was clear to us … everybody knows it … Sevilla, Cadiz, Sherry, Alhambra, Horses, Costa de la Luz. But the province of Almería?

The vacation was great. The guys liked the house as much as we did. It was perfect for the four of us.

What we really loved were all those beautiful beaches not spoilt with high buildings and masses of concrete, the nature between sea, beach and mountains, being active and lazing around at the same time. The natural park of Cabo de Gata, the one and only desert of Europe in Tabernas, the grottoes of Sorbas, the wine producing regions of the Rio de Andarax and the Rio de Almanzora, olive oil, Jámon, cheese, fish, fruits, vegetables … we were on fire. And as we could see all our must-haves to be fulfilled as well as most of the nice-to-haves, we decided to submit a bid.

That’s when re-entered a long period of waiting. The former owner of the house didn’t seem to be delighted and I would lie if I would say that coming to an agreement had been a piece of cake. Rants, tears, heated discussions, understanding, misunderstandings, sudden fears which came up – in short, everybody’s emotions were a roller coaster and our families faced the hardest test ever.

In the end everything did turn out well, which is the most important thing and really the only thing that counts. When you’re here we will tell you a bit more about our removal, the reconstructions of the house and the disastrous side effects J

Come and join us at Cortijo El Sarmiento – your Luxury B&B in Andalusia.
We look forward to seeing you.